ParserComp entry for 2022. You don't need to know the rules of chess to play this. I hope it's entertaining--it's based on a classic puzzle but hopefully has narrative.

This is a relatively well-known endgame puzzle I tried to add a story to. The parser is ... experimental, so if something is broken, I want to know! You can take a transcript with TRANSCRIPT or report issues at https://github.com/andrewschultz/you-wont-get-her-back.

Update 1: (7/1 5 AM Central) Wade Clarke (http://wadeclarke.com, http://wade-clarke.itch.io) found some bugs very quickly. They involved row/column display and misleading hints and also that "w" had been superseded by "w [x]", the column width adjusting feature added on the final day. These were trivial fixes, and I feel silly I missed them, but they're in now. There was also a problem with double-printing the starting board if you got two achievements at once.

Update 2: (7/2) Wade and Olaf Nowacki (https://fumbaloaoa.itch.io/) followed up with even more useful tweaks! They include row labeling and some debug code being removed and a case where text was printed twice.

Update 3: (7/13) general technical fixes thanks to Eddieriofer's thorough bug reports at github. In particular, the player could be locked out of certain endings. Cover art was added as well. Thanks to kenped at http://kenped.itch.io for reminding me of this bug and also providing a review and advice for cleaning up the help section.

The github site has a list of post-comp bugs to address. I don't want to add new content, but there are things I feel more comfortable thinking about with certain bugs fixed.

When you do an update, can you increment the release number? There are now four releases that are all release 1. That gets a bit confusing if you've downloaded multiple versions and makes it difficult for bibliographers/historians when updating the current version in places like IFDB.

Yes, you're right! I saved a copy of the original-for-ParserComp ZIP. I should upload it and mark it as such, even though it has some obvious bugs I cringe at. And yes, it also causes a problem with save states between versions--I put in a topic at intfiction.org on how to get around that.

The middle 2 point-releases could be recreated, because I have source control. (If you have them, I'd be glad to add them.)

I took the IFComp path of just having the 1st release and the final one available, as I want to limit my fixes to the technical side, and also to something extremely unlikely to regress with proper testing.

I don't have the middle two releases (nor do I need them). I downloaded all the games at the beginning of the comp. Yours was release 1. Then I saw that there were a few updates from you blog entries, so I downloaded the latest and saw that it was still release 1. This could be confusing if, for example, IFDB said the latest version was release 1 and you've got release 1, so you think it's up-to-date, but it's actually got some bugs that have been fixed in a later release 1.

That's how it is in a full development environment, but it doesn't need to be the case here. There's a part of me that feels a 2.0 release for fixing a minor bug is overpromising, but I think it's good to differentiate the latest release from the initial release, and since Inform doesn't allow point-releases, I might as well make it release 2.

So it seems like a reasonable compromise for the future is to have release 2 be any in-comp changes since release 1, then release 3 be a quick turnaround for post-comp features with additional content.

Is this a bug? My pawn is at c3(as the board shows) but the parser seems to think it's on c6, same with the king. 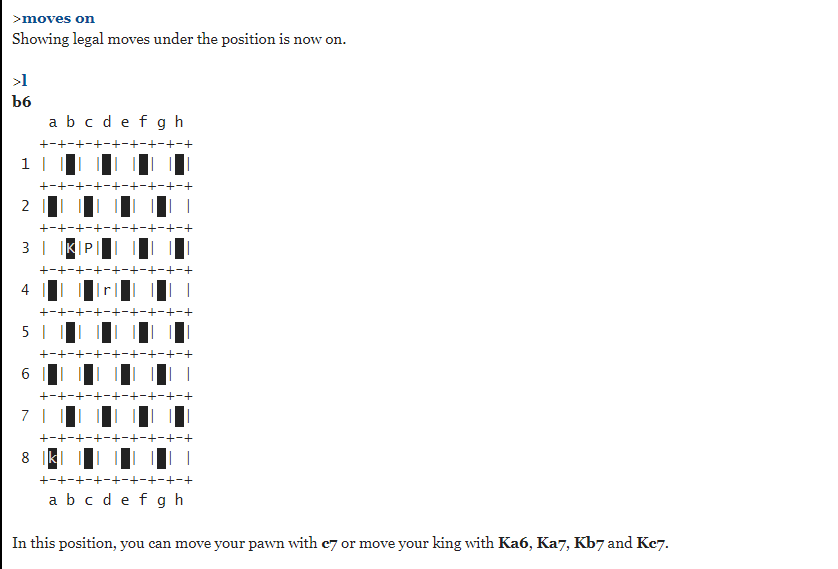 Also, you can type SCR to show only the piece locations to get around the bug for now, if you want.

Fixed. Sorry about that--it's a bit embarrassing this slipped through! The new version is uploaded now. 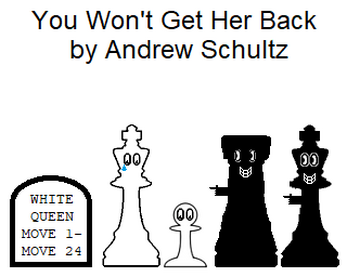